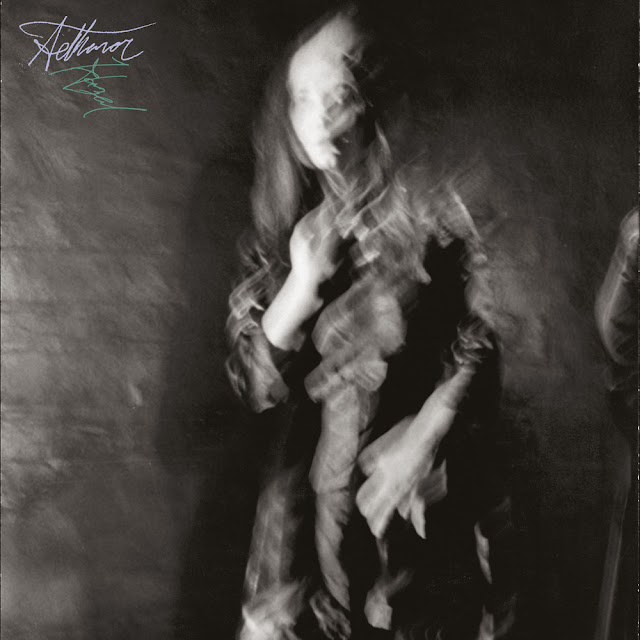 The fifth Æthenor album is upon us. Her moon is liquid. Conceived amidst haze. Italia MMX.

Hazel is the 5th record from this group of eclectic travellers, who bring their considerable pedigrees together in unexpected and original ways. Looking at the people involved, it would be reasonable to expect a massive blowout of sound, but everyone plays with remarkable and effective restraint. The music is atmospheric and layered, with bits and pieces of identifiable rock moves peeking out from under a thick blanket of hard-to-identify drift. Based on live recordings made on a lengthy tour of Italy in 2010, the recordings have been extensively edited and supplemented, but without losing the elemental sound of a group playing live together. While there’s plenty of weird ambient sound to be heard, this isn’t a sound-effects/”pedalboard” record. Like the preceding “En Form for Bla” album, Noble’s drums anchor the music. The drumming is spare and considered, sometimes lashing out with abstract punctuation, and other times laying out a Can-like groove. O’Malley’s guitar is also restrained, providing a bed for O'Sullivan's constantly morphing Rhodes, synths and electronic effects. Kristoffer Rygg contributes a rousing vocal incantation to “Ermanna” and peppers the mix with ghostly modular details. Like their other records, this is not really like anything else out there right now. Sleeve designed by Stephen O’Malley. CD is in card folio printed by Stumptown Printers. LP is in Stoughton Tip-On Jacket, pressed at RTI, and includes download card.

Email ThisBlogThis!Share to TwitterShare to FacebookShare to Pinterest
Labels: Æthenor